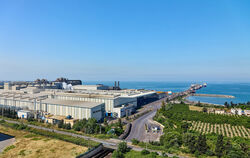 PJSC Magnitogorsk Iron & Steel Works (MMK) announces that MMK Metalurji, an asset of MMK in Turkey, has begun its first phase of hot tests at its electric arc furnace facility with a casting and rolling module. The annual production of hot-rolled coils amounts to about two million tonnes.

MMK has begun the first phase of hot testing of technological equipment at its electric arc furnace, which was halted in 2012 due to economic conditions in the Turkish market. Upon completion of tests the production of hot-rolled coils will resume its work in full.

Viktor Rashnikov, Chairman of the MMK Board of Directors, said:

“The decision to suspend hot-rolled production at MMK Metalurji's site in Iskenderun was based on economic efficiency considerations. …The current situation allows us to resume operations at the electric arc furnace facility, which is a very important component of our Turkish asset”

Viktor Rashnikov, Chairman of the MMK Board of Directors

The phased style launch of the electric arc furnace implies a gradual increase in production. In its predicted trajectory, the site will produce 200-260 thousand tonnes of hot-rolled steel in 2021, with the unit reaching full capacity in 2022.

“We invested about $40 million to restart this production facility. After restarting the hot section and reaching its full capacity, we plan to produce about two million tonnes of hot-rolled coils per year”